As I was typing up that last Summer Fun post, I had a weird feeling that I was leaving out some photos.  That's because I'd already started this post and never finished it.
The rest of those photos!
Thomas at his dorm on the Purdue campus - soooo grown up! 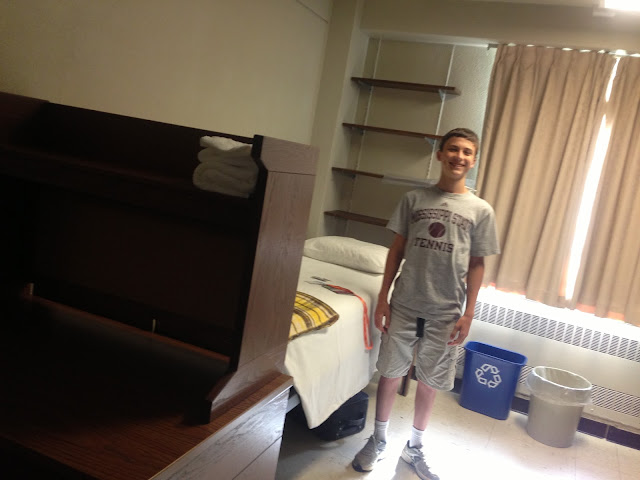 In the dorm, getting ready to leave Thomas.
I cried and then Thomas cried.
I should really not do that :)﻿ 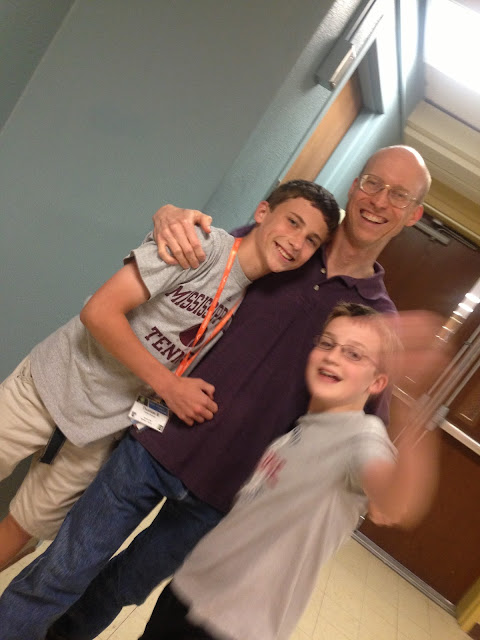 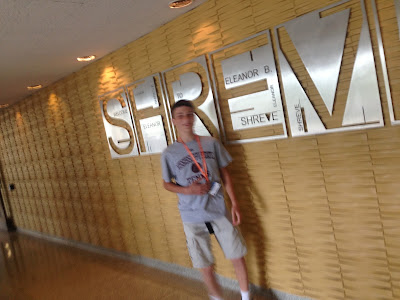 I got back to the car, and this stinker had jumped in the driver's seat.  The odd thing was - he didn't look too out of place.  Oh they're growing up way too fast these days!! 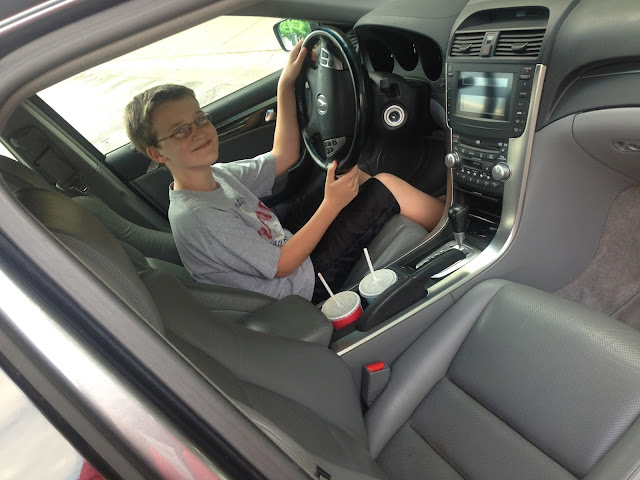 Flowers, balloons, and a Marx Brothers DVD from Grandma Carolyn.  He was thrilled.

OK, that's it :)
Posted by bonnieboatwright@gmail.com at 8:01 AM 0 comments

The second half of our summer was going to be way more relaxing.
Only one camp, a short trip, family visits, and swimming, swimming, swimming.  Or so we thought.
Brennan at his last camp - I was so happy to receive this photo text from the camp director - so great to see the boys when we can't communicate for a week :) 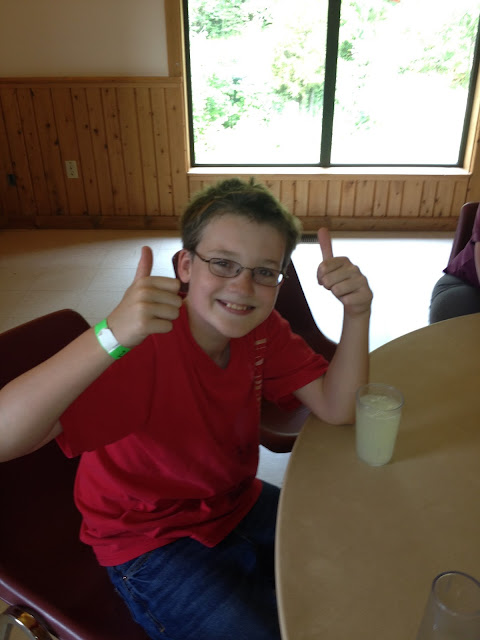 While Thomas was at Purdue University for a week of computer camp, Brennan and I settled into July, hanging out together, getting him ready for his trip to visit Grandma Carolyn in Mississippi.
I taught Brennan to use the weed eater, and he did an awesome job! 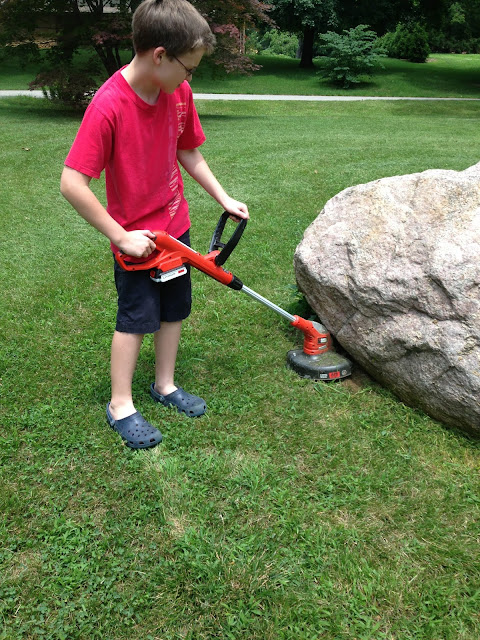 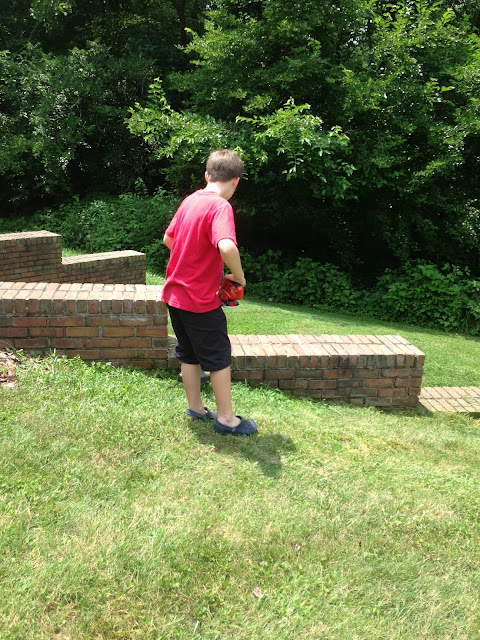 We put the Ladder Golf set together and played one night. 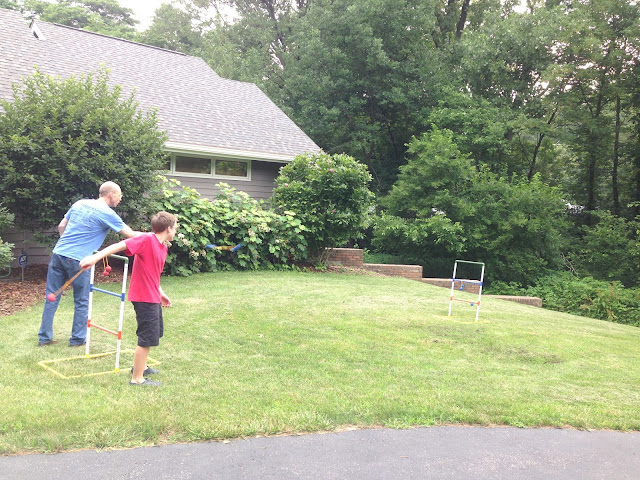 Then David and Brennan left for Mississippi and I went up to Purdue for Thomas's camp's "Parents Showcase".  I hate that this is a blurry photo.  He and his camp instructor in "Minecraft Modding and Java Coding".  He received a wonderful speech with his diploma.  He absolutely loved this camp.  So much so, that he returned this week for another week of camp! 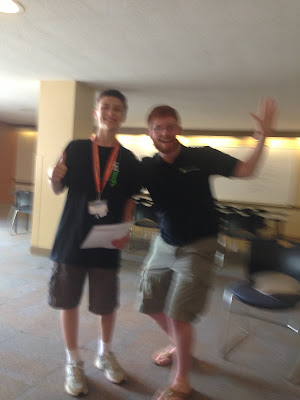 Here Thomas is showing me what all he created while at camp.  We may have discovered his future career - computer science of some sort.  He loved everything about the camp and what he learned.  He's back at Purdue this week for a Role Playing Games coding week. 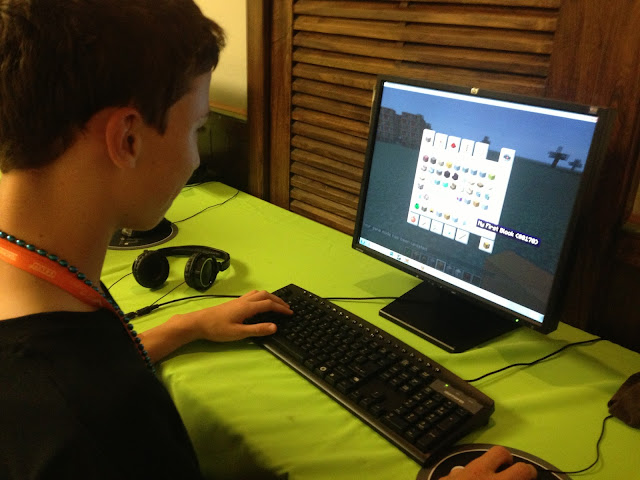 With everyone back home together last Sunday night, the boys were looking forward to:
Sleeping in
Swimming
And basically nothing else for a few days.
And then, Brennan and I headed to the gymnastics center Monday afternoon, and BROKEN ARM.
Misleading photo - he was in a ton of pain at the ER before his second dose of morphine (the first dose did nothing)
﻿ 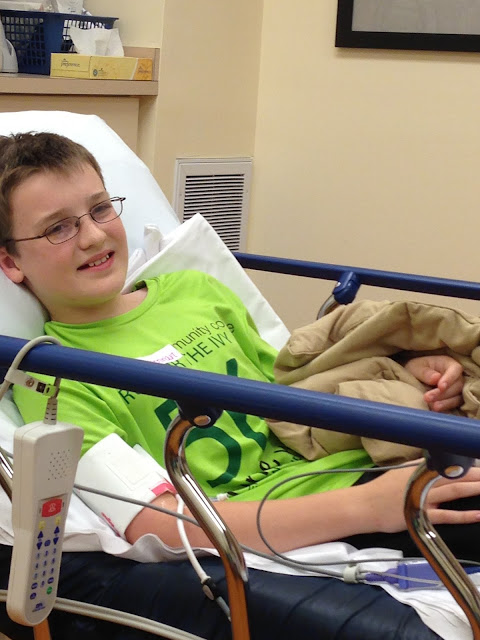 What a trooper though.  He broke both bones in his left arm (thankfully it's his left!), and has a puncture wound.  He's got a full cast for 4-5 weeks, then will get a short cast for a few weeks.
There go all of his swimming, bike riding, tennis, gymnastics, and trampoline park plans :(
Such a sweet thing happened at the hospital.
Thomas was upset about the pain Brennan was in so David eventually took him home since we weren't sure if Brennan would be going in for surgery.
Brennan had David text Thomas at home and let him know that he was OK, not to worry, that he was with "the authorities", and that he was going to be just fine and to relax.
Brennan knows how upset Thomas (and I) get at times and he wanted to take care of his brother.  It was sweet.
Thomas has been a great big brother while Brennan is getting used to his cast.
We're proud of both of the boys. 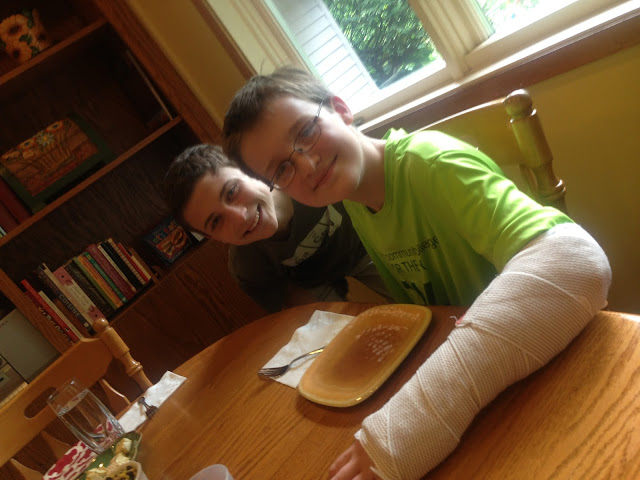 Friends have been so sweet bringing gifts and treats over for Brennan, including fun movies, delicious garden vegetables (everyone knows how much Brennan loves to cook), flowers and balloons all the way from Mississippi, and our neighbor who is herself recuperating, brought over a delicious cake and a whole bunch of facts that she compiled about Brennan's birth year.  She knows how much he loves facts :) 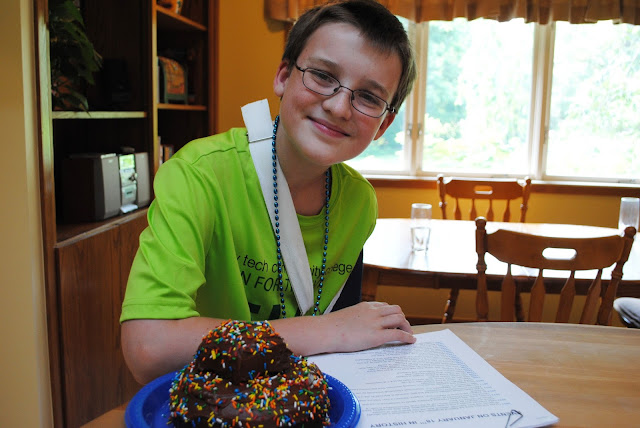 Friends invited us out to the lake on Saturday and it was such a wonderful time.
Thomas's friend Niel came along with us.  They tubed, canoed (by themselves!!!), swam, lounged, played hide and seek outdoors, built a bonfire, and played with the dogs.  It was a perfect day.﻿ 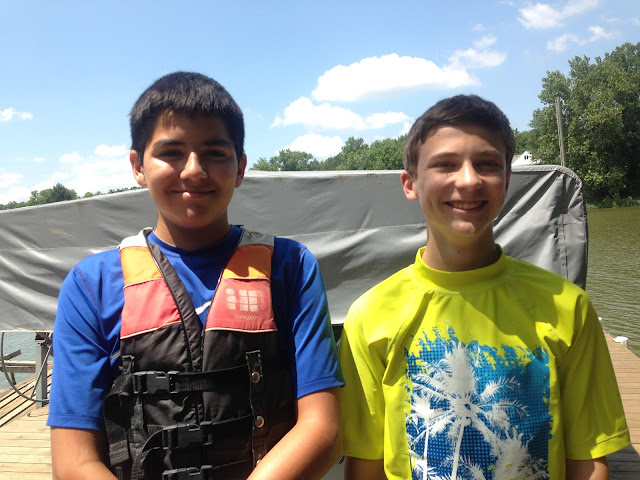 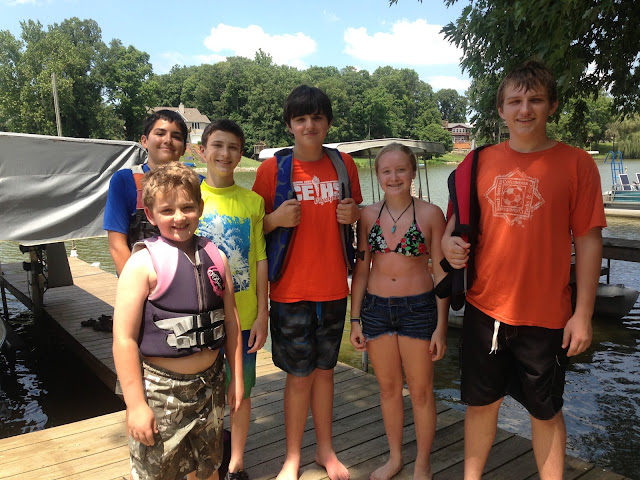 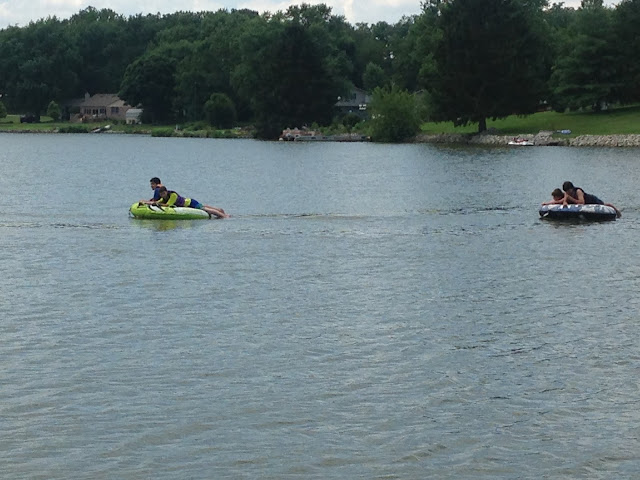 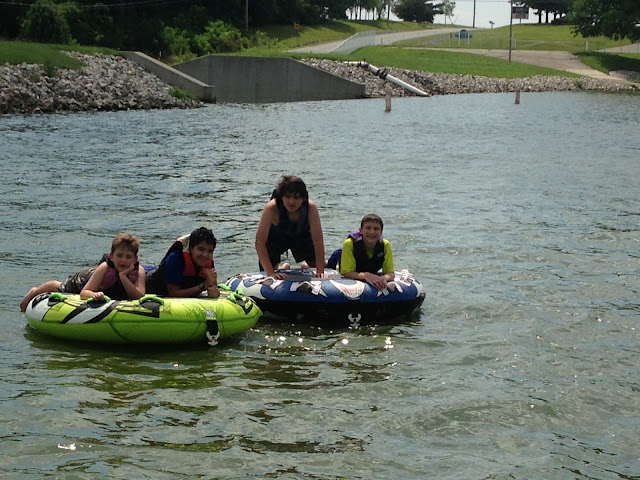 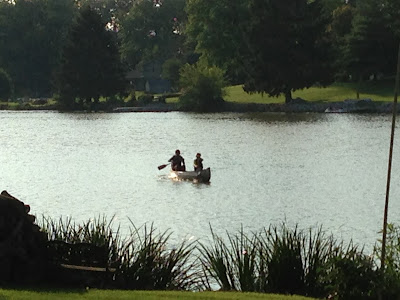 Thomas is off to his last camp now, and Brennan and I enjoyed Despicable Me 2 and some frozen custard yesterday.﻿ 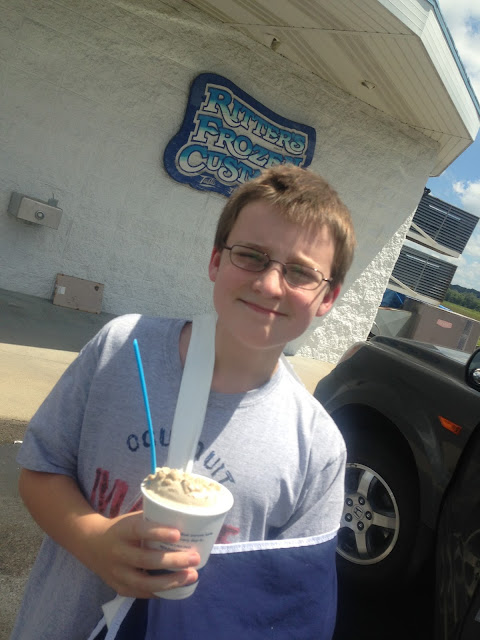 House projects still continue.  The interior painting got done the first week of July (after years of wanting it done, it's thrilling!!).  Our pool slide was cracked, so after much research David decided to take on the huge project himself of refinishing the slide.  Fiberglass is rather tough to work with.  He spent days peeling off the outer layer and sanding.  Here it is primed on Saturday.  He's started to paint it a bright blue.  I'll post photos as soon as it's done!
I hope all the kids that come to swim appreciate the effort that went into this project :) 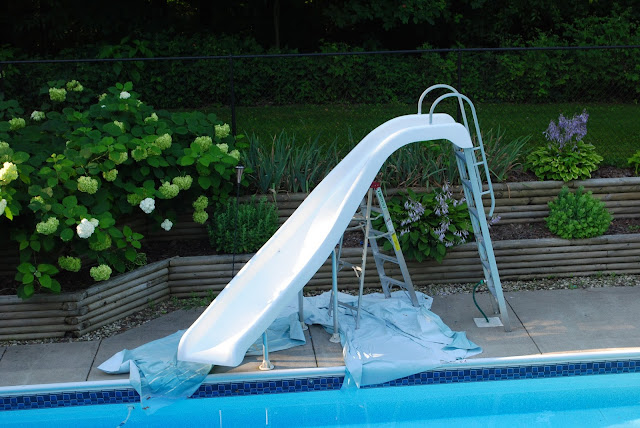 We're having a great summer 2013 - hope you are too!
Posted by bonnieboatwright@gmail.com at 7:56 AM 0 comments